“More than anything, we are never alone”: Beth’s story

When what felt like a blessing became a battle, Beth made the unbelievably hard decision to stop taking Kaftrio

‘Kaftrio’ is a word that has surrounded the CF community for what seems like forever. Years spent praying and campaigning for it, before it even had a name. Seeing the journeys of thousands and their second chance at life all around the world. Hearing the sound of resounding hope. For many with CF and their families, it’s been a blessing.

Nothing I say can diminish Kaftrio as anything less than a blessing – but there’s another, very lonely side to it that also needs to be given a voice, so others don’t feel alone. 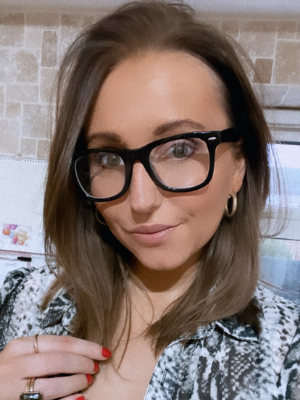 I was on Kaftrio for a year. It didn’t impact hugely on my lung capacity, but there were some obvious improvements straight away; running felt lighter, I could fight infections and colds without needing drastic intervention, my cough disappeared, sleep felt easier, and I wasn’t having to constantly think about breathing like I had for 28 years before.

So, I’ll be the first to say there are true benefits to being on Kaftrio. But my journey soon took a turn for the worse, as I started experiencing brain fog. It was a bit like having ‘baby brain’ again, but it got worse over the next few months. Six months into taking Kaftrio, things were becoming quite serious. I would drive home and not remember getting there; I would forget how to make a drink; I would forget to turn the oven off.

I tried to push through because I knew the good Kaftrio was doing. But I reached a point where it was impossible. It was affecting my mental health more by the day. I’ve always been an organised person and take pride in being on the ball – and as a mum to a now five-year-old, I needed to put her first.

My decision to stop taking Kaftrio was met with resistance from my CF team, but in the end I made the decision for my mental health and safety, and that of my family. To say this was by far the hardest choice I’ve made in 30 years would be an understatement. I truly had no idea what it meant. But when I weighed up my quality of life, I made the choice that safety and being there for my daughter came first. 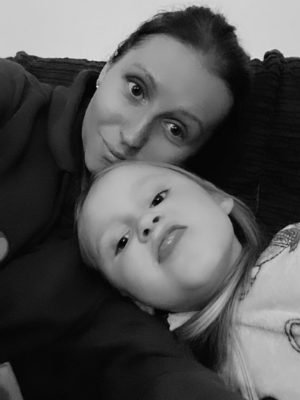 Within seven days of stopping the treatment, all the feelings of brain fog lifted and I could function again. But still, to this day, I have lost almost six months of my life and memory. That is something that I still find hard to accept.

In the months after I came off Kaftrio, I threw myself into running marathons to fundraise for the Trust. Very quickly it felt like the old CF again. My lungs felt old and tired. I wasn’t prepared for this. I assumed I would go back to the way I was pre-Kaftrio, but wow, was I wrong. My lung function has continued to drop and I’m just finishing up a third round of IV antibiotics. It’s been a struggle to come to terms with the fact that I may not get back to how life was before. Physically, it’s a battle, but one that I have faced before; emotionally, this has tested me more than anything in my 30 years.

Imagine being in a fishbowl, surrounded by stories about your friends who are healthier than ever, having amazing sporting achievements, planning for a new future, having families they only ever dreamed of. These are all situations that, 18 months ago, were at the front of my mind too. But within a day, they were taken away, and you can no longer relate to those who also have CF, who used to understand your unique situation. The loneliness is deafening some days, not knowing who you can turn to.

I didn’t want to worry anyone with my story, or suggest that Kaftrio might not work for everyone, that it might have a side to it that’s dark and painful. But I’d not heard of anyone else who had to withdraw from the drug. I felt alone and was desperately looking for answers. It was only when I decided to be open about it that I found others were feeling the same.

I want to use my experience for good and try to make a difference. I want to help others who can’t benefit from Kaftrio feel like they’re not alone, that it’s ok to be scared and all the other feelings that come with an upheaval like this. Whether you have had to withdraw from Kaftrio, or you couldn’t take it in the first place, I want to help everyone feel less alone and forgotten. Please know that if you’re reading this and you can relate, even partially, then we are with you. Please know that the days get brighter, and it is not always as dark as at the start.

I’m still well and truly on my own journey of acceptance and navigating this chapter of my life and what it means for my future. I’m now very focused on the future and my plans and dreams. I want to get married, hopefully have another child one day, finish my Law degree and use it for good. I want to complete more physical goals and hopefully one day there will be a situation that allows this to happen. I’ve always been driven and focused on the future, and I will make sure this continues even through this difficult journey. I want those in my situation, or similar, to know that one day, we’ll have effective treatments too - and more than anything, we are never alone.

You should always speak to your CF team before you change, start, or stop any part of your treatment regimen.

You can report suspected side effects to medicines using the Yellow Card reporting scheme.

If you’re struggling with any aspect of cystic fibrosis, we’re here to help. Contact our Helpline for support, a listening ear or just someone to talk to.

Our friendly Helpline team are here if you need us - whether you're looking for information, support, or just someone to talk to

Lynsey Beswick, Public Affairs and Advocacy Manager at the Trust, reflects on the year since the landmark deal for access to Kaftrio in England was announced amidst the COVID-19 pandemic.

Dancing, golfing, and hiking the Ochil hills: one year of Kaftrio

It's been a year since Kaftrio was approved for use in the UK. Here are your stories of a year with the life-changing drug

Why Kaftrio was a mixed experience for Alexandra