“It's such a fabulous opportunity for the CF community to carve out research priorities and have a say in that process”: Nicole & Martyn’s story

On the day we launch QuestionCF, an exciting project to review your cystic fibrosis (CF) research priorities for the future, Nicole and Martyn Edwards - who have double the reason to be interested in the project - share their story and what’s on their CF research wishlist.

We thought we knew quite a bit about the condition when our son Arlo was diagnosed with CF, because a close friend of ours, Alex, who is now 35, also has CF. 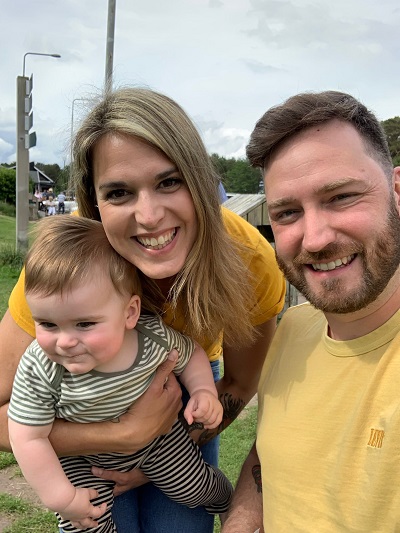 However, we quickly realised that CF is incredibly complex, and that we had only experienced the tip of the iceberg. We knew that Alex took pills before he ate, and we knew that he did physiotherapy - but a true appreciation for life with CF is hard to grasp from the outside looking in. After Arlo’s diagnosis, the biggest shock was the burden of treatments and the amount of work that goes into staying healthy.

We also had an immediate appreciation for how lucky Arlo is to have been born at a time when medical discoveries have improved our understanding of CF, and when there have been huge developments in drug therapies that will be available to Arlo when he is older.

Rather wonderfully, we have known Alex since we were teenagers and we’ve always just seen him as Alex. We’ve never seen him for his CF, and he wasn't and isn't defined by it, so that is something that reassures us when we think about how Arlo will be viewed by his peers as he grows older.

While Alex can't meet Arlo in person, he's an incredible support for us as a family, and we feel very lucky to have him to call upon.

We were really keen to be involved in the QuestionCF project because it’s one that could benefit and shape the future of cystic fibrosis for Arlo's generation, but also for older generations, like Alex’s.

As a CF parent it can feel like you're a bit helpless and there's too many components that sit outside of your control. But being a part of this study has enabled us to feel like we’re doing something proactive that we know will benefit so many people with CF. It's refreshing to be part of a project where it's not medical professionals or pharmaceutical companies telling the community what they think the priorities are, but it's actually giving those in the community a voice and a chance to share their own perspective. It's a really optimistic time to be part of the CF community, but there's a lot that needs to be done to make sure that the needs of everyone with CF are met. Those that have access to modulators, and those that don't.

It’s incredible that such a broad spectrum of people linked to the CF community can get involved in QuestionCF. This is something for those with CF, their mum’s, their dad’s, carers and physicians. We’re proud to be able to highlight CF research priorities that mean the most to us - and we will help to get as many voices as possible.

We have so many research priorities, but it boils down to the following three big topics for us:

“What are the long-term effects of Kaftrio and other CFTR modulators?”

Alex has seen amazing life-changing benefits from Kaftrio, which is absolutely joyful to see. We also hope that Arlo will be able to benefit from it when he is older, and we think this is probably the closest thing to a cure for us as a family for the time being. So understanding more about the side effects and long-term implications is a priority for us. And also whether these therapies can be applied to rare mutations, so that it's more of an inclusive treatment for the wider CF community.

“How can we better treat infections?”

As CF parents our biggest worry is about infections, so a priority for us would be developing better antibiotics and treatments for the big infections like Pseudomonas aeruginosa, as treatments for these are heavy going, and we don’t want bugs like these to take hold in Arlo’s lungs.

“How can we support good mental health and wellbeing?”

Mental health is incredibly important to everyone in the CF community – it’s vital to support people with CF throughout their personal journey with the condition - which is unique to them as it affects everyone differently. We also need to support both those who do and don’t have access to modulators, and parents and caregivers too.

The QuestionCF survey opened today and will stay open until 20 February. We’re asking the whole community – people with CF, families, carers, professionals and researchers – to share your views and tell us what your CF research priorities are right now, in 2022.