“A life unlimited would mean being free of the physical and emotional pain of CF” : Dom's CF Week story

Over the course of this year’s CF Week – taking place from 13 to 19 June – we will be sharing stories from across the CF community about life with CF: the ups, the downs and everything in between. Here, Dom, Helpline Officer at the Trust, tells us about the impact CF has on his mental health and how he manages these challenges. 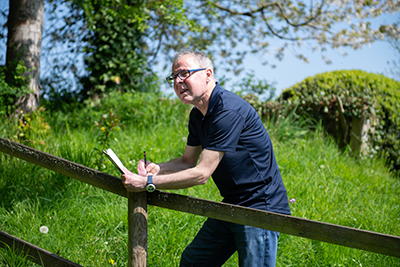 I’m Dom, I’m in my mid-50s and live with CF and CF-related diabetes, and am post lung transplant. I work on Cystic Fibrosis Trust’s Helpline, providing information and support to the CF community, and anybody who wants to know more about CF. In my spare time, I like to photograph and paint wildlife and landscapes; it rests my mind and relaxes me. Exercise is particularly important to me to look after my lungs, diabetes and bone density as I grow older. I’m a keen cyclist and walker and love living out in the countryside.

I felt like I was living two lives: the external one and my ‘secret’ CF life

The impact of CF on my mental health has ebbed and flowed over the years.

As a child, I knew already that I was different to my peers. I was smaller and skinnier, took lots of different tablets, and tired more easily than my friends who had more stamina and strength. I tried to make up for this with determination to keep up and be accepted. It became harder as I got to secondary school where the disparity between us was much more apparent. I was embarrassed about having CF and so never shared this with friends and rarely had them round to the house.

Even at university, to fit in, I’d keep CF to myself as much as possible and felt like I was living two lives: the external one which friends and others saw and my ‘secret’ inward CF life. Young adult life is so often centred around socialising, drinking and late nights and I kept up for a time but knew I had to look after myself ultimately.  The extra commitment to stay as well as possible was, and still is, relentless.

CF can be isolating at times and was much more so as I became more unwell before having a transplant. The isolation, sense of helplessness and emptiness that accompanied a feeling of just ‘existing’ was dispiriting. With time on my hands, particularly in hospital and restricted to a single side room, I had a lot of time to think and too much time to dwell on the less positive. But drawing and painting, reading and listening to the radio helped me escape.

I wanted to retain some sense of normality 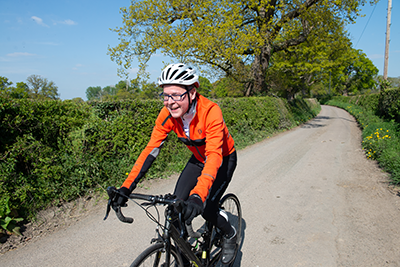 During those times, It was frustrating not to be able to plan anything enjoyable as I couldn’t be certain I’d be well enough to manage physically day to day. There was sometimes a sense of pointlessness about life when, at my worst, I hardly had strength to do more than lie down or sit up for a short while.

The topic of conversation with others, well-meaning as they were, was often my CF and how I was, but I wanted to retain some sense of normality. Wildlife, the garden, painting or a book became my haven when I had the strength for that. I had my wife and our cat for company. My football team Birmingham City’s results - trivial as some may say - either lifted my mood or worsened it.

Living a life unlimited for me would mean being able to live free from the pressures of managing CF; to travel when and where I like, and not have to second-guess when my donor lungs will expire. It would mean being able to retire in good health; being free of the physical and emotional pain of CF; and having career choices unrestricted by health.

Over the years I’ve found strategies to help me deal with the mental pressures of CF and cope with the tough moments. I’ve found it easier to manage CF by accepting the change in my health and then working to reduce the impact it has on me, capitalising on the advice from my specialist CF team or by adapting my life and interests to suit any changes in my health. For example, I returned to painting and drawing (a hobby since childhood) when I was too unwell to be active and that helped take my mind off CF and the precarious position I was in, not knowing if a transplant would materialise.

If I can manage physical symptoms, understand what the impact is and how to treat it by learning from my CF team, I also find I can better deal with CF mentally.  If a physical health complication emerges or worsens, I don’t avoid it or hide from it, but tackle it head on and look at is a challenge to overcome. I want to stay as well as long as possible and know that like having a house, car or garden, my CF body needs regular maintenance, understanding how it works and treating it well. 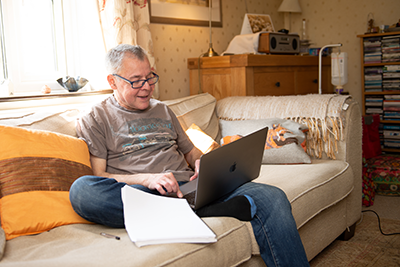 CF has no switch-off button, no remission, no cure and doesn’t give you days off

Despite sometimes comparing my life to those without CF, I have been able to live and work abroad, travel to other countries, and still have the physical strength to enjoy life. I think of my life as being a fulfilling life despite the limitations of having CF.

Living a life unlimited for me would mean being able to live free from the pressures of managing CF; to travel when and where I like, and not have to second-guess when my donor lungs will expire. It would mean being able to retire in good health; being free of the physical and emotional pain of CF; and having career choices unrestricted by health. My lung transplant has opened new opportunities for me, but there are still restrictions.

CF has no switch-off button, no remission, no cure and doesn’t give you days off. It’s testament to the resilience of people with CF and parents/carers how we manage to bounce back. If I have a physical or mental health blip, I remind myself what I have got and what I can do.

Will you unite with us this CF Week?