“CF is just one part of me and definitely not the most important part of me": Kareem and Yasmin's CF Week story

Over the course of this year’s CF Week - taking place from 13 to 19 June - we will be sharing stories from across the CF community about life with CF: the ups, the downs and everything in between. Here, Kareem, who has CF, and his sister Yasmin, sat down to have a chat with us about dealing with the condition as a family, being diagnosed in your teens, and showing a true representation of a diverse CF community. 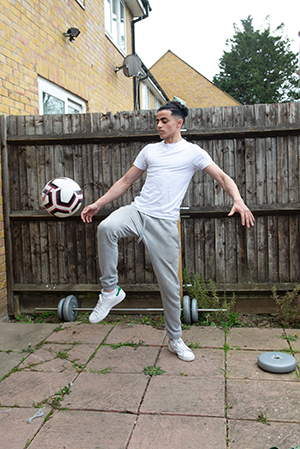 Kareem: My name is Kareem. I’m 19-years-old and I live in South London. My family are Egyptian and my hobbies include playing football, going to the gym and Xbox. I also have an interest in reading and researching about the economy and am studying Business and Finance at university.

Yasmin: And I’m Yasmin, I’m 25 and am Kareem’s older sister. I love yoga, reading and meeting friends for coffee.

Kareem: I was diagnosed with CF at 14. We were actually studying it in science lessons at the time which was kind of funny! It turned my world upside down when I found out. When you’re that age, we are all still developing our personality and emotions and forming the person you want to be in the future, so it took me some time to come to terms with it.

As a Muslim, the first couple of years when I was old enough to participate in Ramadan fasting were particularly hard as I felt bad as I could only do a half-day fast. This used to make me dread the time of year when I would feel guilty. Then I couldn’t fast whilst I was still getting used to Creon and increasing my weight. CF also impacted my body image which made Ramadan near the start of my diagnosis even more anxiety-inducing.

It can feel isolating as I never see people with CF who look like me, speak the same language as me or are even from the same hemisphere as me! So I want to lead by example and show that CF can affect anybody.

Yasmin: When Kareen was diagnosed it was almost the best and worst news. After so long without answers, we finally knew as a family why he was struggling with different symptoms, but it was also difficult to come to terms with the impact the diagnosis would have on Kareem’s life.

We just focused on how we could support Kareem. How we could make life as easy as possible for him and make sure we were there when he needed us. As a sibling, I think it’s important to be led by Kareem and how he is. When he’s having down days, I try to distract him and remind him of everything going on in his life that isn’t related to CF. As his older sister, I’m also not going to stop giving him flack! I try and treat him the same as I’ve always done.

Kareem: That’s important to me as I’m determined to not let CF limit anything I want to do in my life. I want to live life to the fullest and show other young people that CF doesn’t have to define you or stop you doing the things you love – that’s what a life unlimited means to me. There are days which are tough and I get frustrated when I can’t play football with my friends and do other things that 19-year-olds do.

Yasmin: CF is not Kareem’s entire being, it’s just one part of him. Yes, sometimes it is the most difficult part, but it’s definitely not the most important part!

Yasmin: By sharing our story we want to show the experience of CF of those from less represented backgrounds. There needs to be more representation and cultural understanding, so people can see that anybody can have CF and have the same struggles, and we all need the same support.

Kareem: It can feel isolating as I never see people with CF who look like me, speak the same language as me or are even from the same hemisphere as me! So I want to lead by example and show that CF can affect anybody.

Will you unite with us this CF Week?