Over the course of this year’s CF Week - taking place from 13 to 19 June - we will be sharing inspiring stories from across the CF community. Cameron Hutchinson is an actor and recently starred in Hollyoaks. Here he shares how he balances CF with his acting career, his joy at becoming a father and how he’s determined to smash the glass ceiling 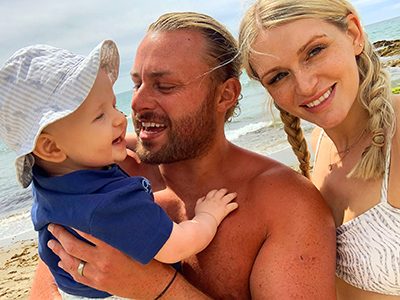 I was diagnosed with cystic fibrosis when I was a week old by a random heel prick test. The nurses came to our house and reassured my parents: “I’m sure he won’t have it as his face would taste salty when you kiss him." My mum was like, “He does taste salty!”

Mum and Dad had no idea what CF was at the time. There was no internet then, so Mum was going to the library looking up CF and seeing nothing but doom and gloom. They were told I wouldn’t see 10 years old.

Throughout my childhood I was very active. I played football, ran and was a professional golfer in my early 20s. But then I got really poorly. I had pneumonia and it was almost like I had been re-diagnosed: I kept my CF at the back of my mind for so long and suddenly here it was. I had months and months of IVs and it was a real uphill battle. In one really dark moment, I didn’t think I would make it out of hospital.

I started taking Kaftrio in September 2020 and within three days I started to notice a difference; it almost felt like a weight had been lifted off my chest. If it wasn’t for this drug, I’d be spending every day in bed. There are tough days, physically and mentally, but I feel like I’ve been given a chance to live life on my own terms. The glass ceiling has been lifted.

Our son Harvey was born last year and is an absolute dream. After three years of IVF and one failed attempt, the moment we got the positive pregnancy test result was incredible. I lived my whole life thinking I wouldn’t be able to have kids so he is our little miracle.

My wife Heather married me knowing it might not happen for us, and from the early days of dating we had to jump to some really serious stuff and that’s not easy in relationships. But she was amazing from the second I told her. Being a father when you have CF is not an easy road - it’s everything we’ve ever wanted but it’s tough too. I know we’re so lucky, so I tell myself that every day.

I started acting in 2015. I was modelling before and had taken on a couple of TV extra roles, and being on set and watching other actors I just got the bug. I became obsessed and knew it was what I wanted to do in my life. Things were going well: I did a couple of commercials, some independent short films, got a line in Emmerdale - and really enjoyed it. But COVID-19 hit, everything got wiped out and then I became really ill.

I didn’t think I’d be able to act again, but when Kaftrio came along it opened up that door for me. I really threw myself into it, got a new agent and started auditioning for lots of different roles. When I landed the part in Hollyoaks as Stephen McGregor, it was a dream come true. It was a real jump out of my comfort zone, but it just felt like it was what I’m meant to do! It’s led to other opportunities too; I’ve just finished a drama for ITV where I’ll be playing a wrestler which I’m excited about.

After everything that has gone on with my health and with my CF, to make my living as an actor… I feel really lucky!

My advice for other people with CF

Try not to let your illness define your life. Barge through any door and don’t take no for an answer. People with CF are built differently; we’ve had to deal with adult problems from a young age and we’ve had to mature quickly and I’ve always embraced that difference.

For me, a life unlimited means living life on my own terms, removing that glass ceiling and not being limited by hospital appointments, IVs and physios. It means not taking a day for granted; not taking breath for granted.

Cameron and his wife Heather will be joining us for an Instagram Live in CF Week (Monday 13 June, 4.45pm). They'll be talking about their CF journey, the importance of raising awareness of cystic fibrosis, and what a life unlimited means to them. Tune in @cftrustuk.

Since 1964, we've supported people with cystic fibrosis to live longer, healthier lives -and we won’t stop until everyone can live without limits imposed by CF.

How we're lifting the limits this CF Week

Ahead of CF Week, which takes place from 13 to 19 June, our Chief Executive David Ramsden is calling on the CF community to come together, raise awareness and unite for a life unlimited.

CF Week is fast approaching! Running from 13 to 19 June, it’s a chance for the community to unite, share stories, spread awareness, and help everybody understand more about CF.